Nepal’s sole international airport Tribhuvan International Airport (TIA) has undergone massive changes after the government started conducting regular inspections amid scathing media reports about bad service, but retrieving one’s luggage at the arrival lounge remains a nightmare.
Travellers often complain that they spend more time waiting to get their luggage than they spend on the flight. The problem arose after TIA removed one of the three luggage conveyor belts at the arrival section in October to replace it with a new one. Five months have passed, but there is no sign of the new conveyor belts.

Hundreds of travellers have been complaining about the service at the airport as they have to wait for at least three hours when passenger traffic rises at peak time.“If waiting for luggage was an Olympic sport, Nepalis would bring home a gold medal,” Anup Kaphle, deputy foreign editor of BuzzFeed, posted on his Facebook page recently.

On Tuesday, the Civil Aviation Authority of Nepal held a meeting with the contractor and it had promised to install it. “However, there is no sign of the contractor installing the belt anytime soon. It has become urgent as a large number of passengers are facing problems to get their luggage on time.”Travellers clear immigration at the arrival section in 30 minutes, but they have to wait for many hours to get their luggage, the officials said. 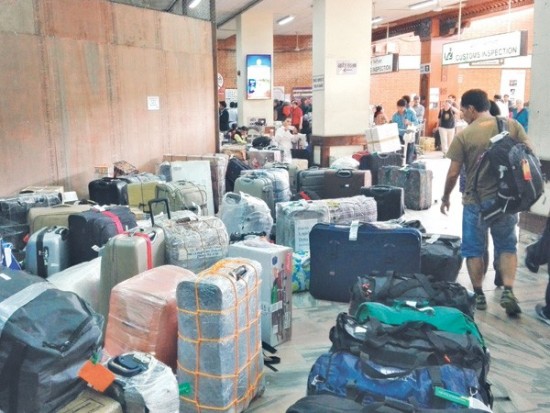 Currently, TIA has been processing passenger luggage through two conveyor belts. A temporary belt has been installed, but it is a one-way system.The belt stranded at the Kolkata port had been released with the help of the Commission for the Investigation of Abuse of Authority (CIAA).The CIAA has been scrutinising TIA after a government committee revealed loopholes and illegal activities plaguing the country’s sole international airport.

As the work to replace the old luggage belt is underway, it has been affecting baggage collection during peak hour, the CIAA said in a report released recently.When four planes land one after another, the two remaining conveyor belts cannot handle the rush, it has stated. CIAA has directed the authority concerned to complete the project as soon as possible.

Installation of the belt is one of the components of the TIA improvement project. The $92-million project jointly funded by the government ($12 million) and Asian Development Bank ($80 million in loan and grant) was implemented on December 6, 2010, with the completion deadline set for March 16, 2016.

The improvement project includes expansion of the existing runway, construction of new taxiways, extension of the apron, refurbishment of the international terminal building and installation of new luggage conveyor belts, among others.

As of now, less than 20 percent of work under the TIA improvement project has been completed due to various problems like the Turkish Airlines crash, April 25 earthquake and fuel shortage caused by the trade embargo.