Vidya Balan does more than just don multiple guises in Bobby Jasoos. She hits many high points as she effortlessly breezes through her role, bearing much of the weight of the film with aplomb in the bargain.

The film does need the support of her shoulders and not only because director Samar Shaikh’s debut effort has its share of limp moments.

Equally importantly, Bobby Jasoos isn’t the sort of flick that is willing to stoop to any level simply to inveigle average consumers of Bollywood kitsch.

A two-hour caper film that thrives on restraint, Bobby Jasoos takes a serious turn in the second half but retains its warmth all the way through.

It is consistently charming, if not particularly exhilarating, and benefits immensely from Balan’s energetic performance.

Bobby Jasoos evokes the ambience of the bustling old city of Hyderabad with a sustained eye for detail and a great deal of fondness.

The film is also aided by a distinctive soundscape created by music composer Shantanu Moitra, and both the songs and the background score set it apart from the crowd.

Vidya Balan plays Bilqees Ahmed alias Bobby Jasoos, a spirited 30-year-old Moghulpura woman who is determined break free from her conservative milieu and explore new avenues.
In the bargain, she runs afoul of her abba (Rajendra Gupta). The patriarch refuses to understand why Bobby should be so desperate to be the best detective in the neighbourhood.

It is obviously a man’s world and the odds that Bobby is up against are revealed in a scene early in the film.

The protagonist walks into the office of a private detective agency in Moghulpura. It is staffed entirely by stuffy-looking guys.

Bobby is in search of an opening in the agency, but she is turned away because she isn’t formally qualified to be a sleuth. She vows to prove the naysayers wrong.

She has a few supportive male friends in the locality – the internet café man Shetty (Prasad Barve) and the tea shop owner Munna (Aakash Dahiya) – who egg her on.
Another of her pals is television news anchor Tasawwur (Ali Fazal), who also happens to be a client.

Tasawwur seeks Bobby’s help to stall his dad’s umpteen attempts to find a girl for him. 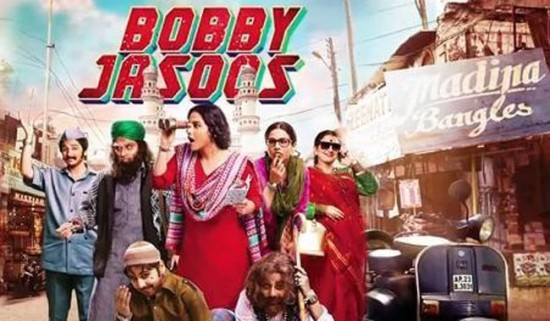 The film springs to life when, from snooping around and exposing furtive love affairs, Bobby graduates to a demanding case that promises to turn things around for her.

As Bobby hits the ground with the case, she encounters many roadblocks, both personally and professionally.

The rest of the film is devoted to her struggle to wriggle out of the many tight corners that she gets into.

Bobby Jasoos may not be evenly engaging, but it stays uncompromisingly true to its essence.

Although it is Vidya Balan who is the focal point of the film, Bobby Jasoos is by no means a one-woman show. The narrative is peopled with an array of relatable characters.
In the Ahmed household, there is a supportive ammi (Supriya Pathak), a kid sister Noor (Benaf Dadachandji) and a busybody Kausar Khaala (Tanvi Azmi), who light up the screen every time they are on it.

Ali Fazal, perfectly cast as the ambitious young man who wants to turn his back on his suffocating middle class upbringing and move into a tony part of town, is clearly an actor who has it in him to go places.

The most impressive among the supporting actors is Rajendra Gupta as the father who sees no reason why a girl from his family should go out and seek a life for herself.

Two sequences involving Gupta stand out. In the first, Bobby, accompanied by her mother, walks over to her father’s room to hand over her first big pay packet to him.

The old man curtly refuses to accept the money, leaving both his wife and daughter at the end of their tether.

In a climactic confrontation, father and daughter come face to face yet again, but this time around the outcome is filled with heightened pathos.

Bobby Jasoos has no item numbers, no cheap thrills, and none of the usual trappings of a wannabe blockbuster.

But it has Vidya Balan in fine fettle, and that should be reason enough for you to go out and watch the film.