Work on the demolition of Jayadeva flyover will begin in September 2018 with the elevated section on Outer Ring Road as well as the loop connecting the Bannerghatta Main Road set to be brought down in nine phases.

“The target is to finish the entire demolition work in three months. We have held meetings with the traffic police for traffic diversion plans. Initially, the work will be taken up during lean hours. Roads will be closed at the intersection only after the full-fledged work begins,” said a senior official in Bangalore Metro Rail Corporation Limited (BMRCL).

Preliminary works have already begun with the digging at the foundation of the flyovers pillars. The BMRCL will build a 4.5 metre-wide road to provide a temporary alternative and plans to widen the Outer Ring Road to reduce the hassle.

The Rs 21 crore-flyover was built by the BDA and unveiled to the public in February 2005. It will be replaced by the multi-level flyover which is part of the RV Road-Bommasandra Metro line (Phase 2 Reach 5) which has been divided into three packages of about 6.4 km each.

Tenders for the line were awarded in July with the RV Road-HSR Layout package, that comprises the new flyover, costing about Rs 798 crore, of which BBMP will contribute Rs 100 crore.

The flyover will facilitate two interchange stations with the Jayadeva station allowing passengers to switch between RV Road-Bommasandra and Gottigere-Nagawara line and the Silk Board station connecting the line to the ORR metro. 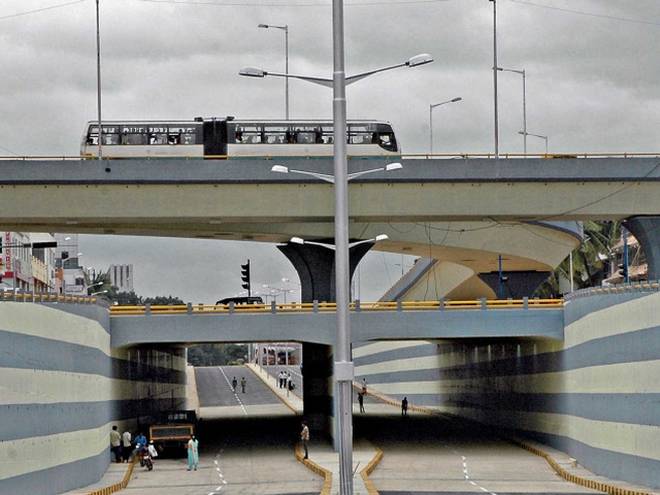 The demolition of Jayadeva flyover will start a three-year-long traffic nightmare. The work on the new flyover involves putting restrictions on vehicle movement at Silk Board junction in the coming months.

The BMRCL has set a three-year deadline for the completion of Phase 2. However, considering the pace of Phase 1, a delay of two to three years is expected.

“We have requested the BMRCL to complete road widening before taking up work. The work near silk board has come to a halt following rains last month. Potholes on the existing road should be filled before they start the work,” traffic police said.