Prime Minister Narendra Modi on Thursday conducted an aerial survey of the devastation caused by the heavy rain and subsequent flooding of Chennai and its suburbs and announced immediate release of Rs1,000 crore for relief and rehabilitation works in Tamil Nadu.

Modi arrived from Delhi in the afternoon at the Naval working station ‘INS Rajali’ in Arakkonam, about 60 km from here, and took an aerial survey of the flood-hit areas of Chennai, its suburbs and Kanchipuram and Tiruvallur districts.

“A sum of Rs1,000 crore will be released immediately by the Government of India to carry out relief works. This will be in addition to Rs940 crore, which was released earlier (by the Centre),” he said in a brief statement at the Naval base “INS Adyar” here.

Flanked by Governor K Rosaiah and Chief Minister J Jayalalithaa, Modi began his brief statement with a sentence in Tamil telling people of Tamil Nadu, “I will be in support of you”. Switching to English, Modi said he has seen the damage and misery caused by the rain fury.

“I have directed that Rs 1000 crore be released immediately by the Government of India to Tamil Nadu for immediate relief,” he said in another tweet. “I have seen the damage and misery caused by the extremely heavy rainfall,” said another of his tweet.

The Prime Minister made the announcement after holding consultations with Chief Minister J Jayalalithaa at the Naval base. Jayalalithaa urged the PM for an immediate “on account” release of Rs 5000 crore for flood relief works.

After an earlier spell of heavy rains and damage in November, the Prime Minister had announced release of Rs 940 crore to Tamil Nadu. In the Lok Sabha, Home Minisiter Rajnath Singh said that the unprecedented rain has turned Chennai into an “island” and announced that all possible help was being extended to the State. He said 12 boats of Navy along with 155 personnel, besides Air Force, have been pressed into service in the rescue operations. 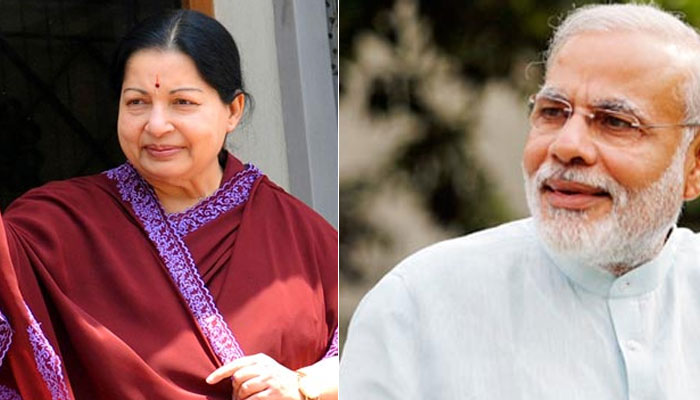 Speaking in the Lok Sabha, the Home Minister said Tamil Nadu’s capital was witnessing an emergency situation with unrelenting rain which was a record in the last 100 years. An estimated 269 people have died in Tamil Nadu due to the torrential rain, while two in Pudducherry and 54 in Andhra Pradesh, he said. According to the forecast, more rain is expected in the city, he said. Rajnath said in the 24 hours ending 8.30 am of December 2, Chennai received 330 mm of rain when the fact is that in the whole of December it generally gets 250 mm