apple, Google, Facebook along with few more companies are planning on to take their opposition against Donald Trump’s Immigration order a step ahead. According to Recode’s Kara Swisher, these companies are working on a formal letter opposing Trump’s temporary ban against travelers from seven Muslim countries. Swisher writes that this would be the first such joint effort from these companies in against of Trump’s travel orders.

Donald Trump on Friday announced temporary ban on travelers from seven Muslim-majority countries and refugee settlements in US. The order came into effect on Friday night and since then the president is facing some strong opposition with thousands of Americans hitting the road to protest. Silicon Valley which is full of companies founded by first or second generation immigrants has also been vocal with its bigwigs like Sergey Brin, Tim Cook, Mark Zuckerberg and others openly opposing the ban. 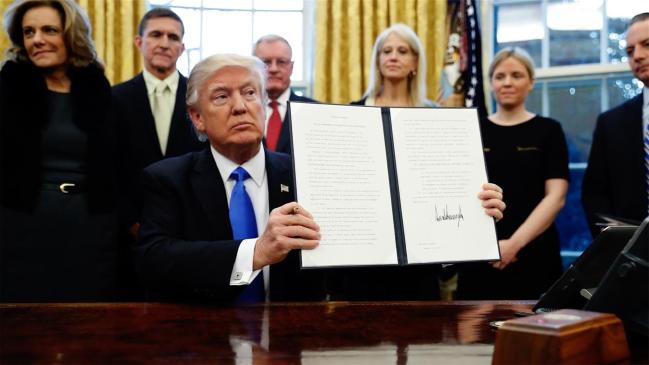 Almost all tech big companies have slammed the order. Apple would not exist without immigration, let alone thrive and innovate the way we doIt is not a policy we support, said Apple CEO Tim Cook. Facebook CEO Mark Zuckerberg wrote, Like many of you, I’m concerned about the impact of the recent executive orders signed by President TrumpWe should also keep our doors open to refugees and those who need help. That’s who we are. Google CEO Sundar Pichai, an immigrant himself, has said, We’re concerned about the impact of this order and any proposals that could impose restrictions on Googlers and their families, or that create barriers to bringing great talent to the US. Pichai said that the ban affaects hit around 190 Google employees. Google has set up a $4 million fund for four organisations that are helping immigrants. Airbnb has also announced that it is providing free housing to refugees and anyone not allowed in the US.