Tata Motors receives a follow-on contract with the Indian Army to supply an additional 619 units of its high-mobility vehicle (HMV) 6X6 multi-axle trucks for an unspecified amount. This is in addition to an earlier order for 1,239 units received in 2015.

Being built with a material handling crane, the Tata 6X6 HMV is meant for the loading-unloading and transportation of ammunition pallets, spares and other operational equipment.

“This is the single largest order awarded to an Indian private OEM (Original Equipment Manufacturers) in land systems by the Indian army, under the Indian Ministry of Defence DPP (Defence Procurement Procedure),” according to a statement from Tata Motors.

The Tata 6X6 high mobility all-terrain all-wheel drive vehicle, has demonstrated maximum performance in the most demanding conditions and is built on a capable platform for diverse tasks. The vehicle has been designed to cope with extreme on or off-road loads and have gone through trials including deep water-fording, on cross country terrains and plains and put through the VRDE’s (Vehicle Research & Development Establishment) “torture track.”

“We are extremely encouraged by the country’s thrust towards ‘indigenization’, which not only helps strengthen the country’s defence manufacturing base, but also emphasizes on cost effective maintenance, serviceability and upgradation of defence equipment,” Vernon Noronha, Vice President, Defence & Government Business, Tata Motors Ltd said. 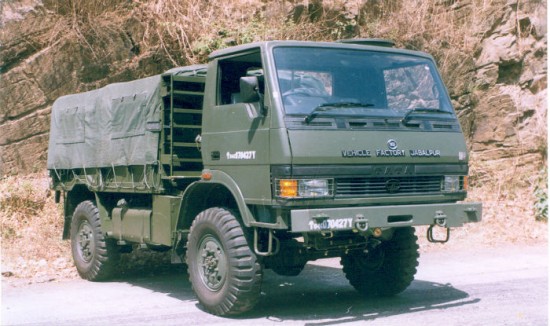 “In line with the government’s ‘Make in India’ initiative, we will continue to focus on further developing a comprehensive range of defence vehicles right here in India, including front line combat vehicles such as the FICV , to meet the evolving requirements of defence forces in India, and around the world,” Mr. Noronha said.

The Tata 6X6 is designed for easy operability and it has a modular cabin which is fully-ready for up-armoring. It has high ground clearance and can negotiate gradients, sand dunes, off-road terrains, and trenches, with higher water and mud fording capabilities while carrying designated military payloads.

It is fitted with a central tire inflation system (CTIS), which allows the driver to adjust the tyre pressure from his seat, for better traction on different surfaces, especially when carrying vital and heavy loads. “The vehicle is also capable of achieving sustained speeds of 40 kmph, on severe cross country terrains. The Self-Recovery Winch assists in extraction of the vehicle (including other vehicles).