In the weeks leading up to the Kentucky Derby, Japan-based Lani acted like a tourist on vacation.The feisty gray colt displayed an amorous eye for passing fillies, often whinnied loudly upon exiting his stall and occasionally refused to budge during workouts.

All of this would have been cause for concern for his handlers if the temperamental bad boy didn’t charge to a ninth-place finish in the Derby after being bumped at the outset.

Now, after a calming two weeks at Belmont Park in New York, Lani is poised to make a run at greatness in the Preakness on Saturday.”Since he left Japan for this trip, I would say that he is in the best form right now,” said Keita Tanaka, the agent for owner Koji Maeda.

Lani earned the right to compete for the Triple Crown by winning the 1 3/16-mile U.A.E. Derby on March 26 in Dubai. The plan was to run Lani in the Kentucky Derby and skip the Preakness for the Belmont, but his showing in Lexington caused trainer Mikio Matsunaga to change in the itinerary.

“He didn’t want a long gap between races,” said Soshi Inoue, spokesman for Matsunaga. “It was a good option to be here. (Matsunaga) feels we have a great chance.”Lani’s behavior at Belmont Park — where there are fewer horses, a quieter atmosphere and a wider track — provided Matsunaga reason to believe his entrant has a shot at spoiling Nyquist’s bid for a Triple Crown. 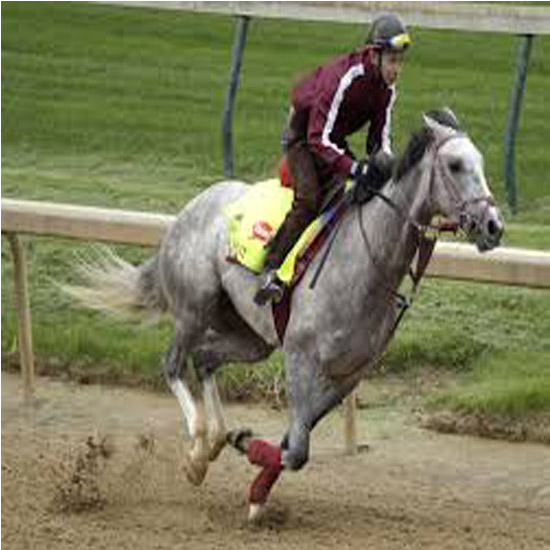 “He likes the barn and the track since arriving here, so the training is on plan,” Tanaka said from New York. “He’s been better behaved since he’s been here.”Inoue insisted that Lani’s excitable personality isn’t necessarily a 24-7 thing.”He’s not always like that,” Inoue said. “But it’s his character. We are not concerned.”

Lani will be the first Japan-based horse to run in the Preakness. His jockey, as it was in the Kentucky Derby, will be 16-time Japanese champion Yutaka Take.Lani will break from the No. 6 post for the 1 3/16-mile race at Pimlico Race Course.

“He wanted the outside draw and No. 6 is technically outside, so he is pretty much satisfied,” said Inoue, who spoke with Matsunaga by telephone after Wednesday’s draw was announced. Matsunaga was at Belmont Park with Lani, who was to be shipped to Baltimore early Thursday.

Rain is expected on Saturday, but that would not dampen the chances of Lani, who was sired by the Grade I winner Tapit.”(Matsunaga) wanted a fast track but isn’t concerned about having to run on a muddy track,” Inoue said.Rain or shine, quirky or business-like, Lani will make this unplanned run through Baltimore before heading back to New York.

“As long as we came to the U.S., I want to participate in all legs of the Triple Crown,” Tanaka said. “The Preakness was not planned before the Derby, but he came out of the Derby OK in good condition, and so we have decided to have him run at Pimlico.”