Lewis Hamilton has hit out at the “bloody ridiculous” sanctions that race stewards are handing out this season after the Mercedes driver was given his second reprimand of the season during qualifying for the Russian Grand Prix, leaving him one away from receiving a 10-place grid penalty.

Hamilton overcame a difficult Saturday that saw his engine fail for the second consecutive qualifying session – which left him starting in tenth – to charge his way through the pack and finish second, although he lost further ground to his teammate and championship leader Nico Rosberg in the drivers’ standing.

Speaking after the race, Hamilton admitted that he was finding the decisions from the stewards difficult to take, and appeared almost resigned to accept that he will probably get a grid penalty for a third reprimand later on in the season.

“I’m just aware there’s most likely going to be one 10-place grid penalty because I’ve got one more reprimand to go,” Hamilton said. “The last one was bloody ridiculous.”

Hamilton was sanctioned in Sochi for going straight over the first chicane and not veering left to go around a bollard that had been installed new for this year’s race. Given that Hamilton immediately abandoned the lap, the 31-year-old gained no advantage from doing so, yet according to the letter of the law he should have received a reprimand.

His earlier indiscretion came in Bahrain when, after sealing pole position in qualifying, he came back into the pits and was not told where to go. Having realised he had overshot the enclosure for the top three, Hamilton stopped, reversed all of 50cm and received his first reprimand of the year later in the day.

The three-time world champion drew on past experiences with stewards to stress that the decisions taken against him were overly harsh.“When I was in karting there was one steward who was just there to make everyone’s weekend a bad weekend,” added Hamilton. “I’m starting to have reminiscent experiences. Families would turn up and spend so much money to be there but there was this one guy who was a complete a***hole. I heard he’s still there. He was just there to ruin people’s weekend. I have started to see signs of him.” 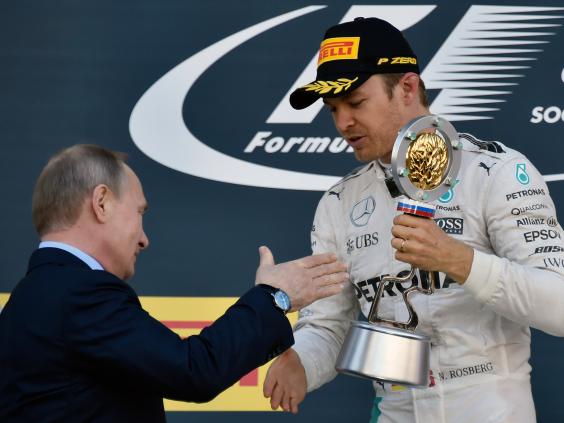 FIA hill climb commission president Paul Gutjahr featured on both steward panels in Bahrain and Russia, although it is not clear if Hamilton was directly talking about one current individual in his criticism.

One person who was direct in his criticism though was Sebastian Vettel after he collided with Red Bull’s Daniil Kvyat for the second consecutive race. Much to Vettel’s disagreement, their clash in China was deemed a racing incident, but there was no doubt that Kvyat was at fault for their two collisions on the opening lap in Sochi that left Vettel in the wall of turn four and out of the race.

“He was not happy at all, he was going ballistic,” Ferrari team principal Maurizio Arrivabene said. “He has taken a DNF for a second time [after failing to start in Bahrain]for something that has nothing to do with him. This is the character of a guy who is a four-times world champion who wants to win, so it’s understandable. Afterwards we talked and he was a bit more calm but of course calm does not mean happy.”

Vettel understandably lost his temper inside his Ferrari cockpit after being punted off track by Kvyat, and he immediately marched down to the Red Bull pit wall to have words with his former boss Christian Horner, before telling media that “someone needs to have a word with him [Kvyat]”.

“Last time, in China, I was not complaining about Kvyat and I said he has done his job,” Arrivabene added. “This time, I can’t find any reason for what has happened.”

Meanwhile, Rosberg defended an allegation that his fourth win of the season and seventh in a row had been gifted to him. Rosberg extended his lead over Hamilton to 43 points after a lights-to-flag victory, and he became just the fourth driver in Formula One history to take the opening four grand prixs of the year after Alberto Ascari, Vettel and Michael Schumacher twice.

“Winning F1 races is not like an open goal. Of course it’s not something that I could have expected, to start the season with four wins, but now that’s the way it is and I’m very happy about it,” said Rosberg.

“I’m aware it’s not going to continue like that forever. Sport is always about up and downs and the down will come at some point. I just need to mentally prepare for that to then come straight back up when it does happen.”

Hamilton has been hit with problems at all four race weekends so far this season whereas Rosberg’s have unfolded without drama, but the German stressed that it only takes one bad weekend for Hamilton to get back into the title picture.

“I am well aware that Lewis is going to bounce back when he has his clean weekend and it’s going to be the usual tough battle against him,” he added.”Nothing’s changed there. He’s as motivated and as quick as ever. It will be a great battle again in Barcelona.”