Posting on the Facebook page of the St Andrew Branch of the Democratic Labour Party (DLP), defeated DLP St Andrew candidate Irene Sandiford-Garner pointed out that in her first 24 hours [as Prime Minister]Mia [Mottley] added 14 new ministers and three staff each”, which she calculated would cost the Treasury $664,000 a month or $8 million a year

Mia Cares Pray 4 Barbadosthe former parliamentary secretary in the Ministry of Tourism and International Transport added, following this afternoon’s announcement by Mottley of her new Cabinet and senatorial team of 12, which is much larger than the 20-member Cabinet team headed by former Prime Minister Freundel Stuart whose Government was ousted from power on Thursday. 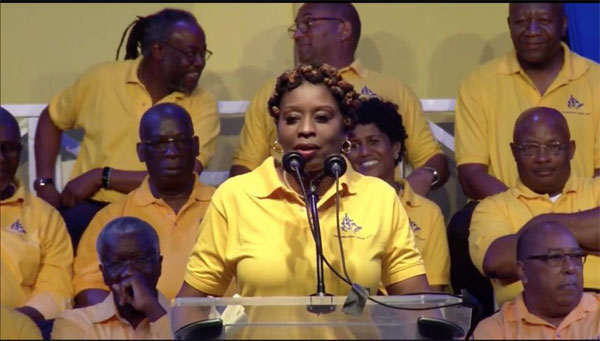 In a humiliating defeat, Stuart’s DLP did not retain a single seat as Mottley’s Barbados Labour Party (BLP) romped to power with a clean sweep of the 30 seats in the House of Assembly.

Earlier, Sandiford-Garner, who lost by more than 2,000 votes to the BLP’s incumbent George Payne in the rural riding, had publicly conceded defeat in the same social media group.

The people have spokenshe said in a post made on Friday morning, while congratulating the new Government of Barbados.

Thanks to each and every person in St Andrew who remained steadfast. I did my best.
Remember: God is in control whatever he does is well doneSandiford-Garner added.

Denis Kellman
Defeated St Lucy candidate and former Minister of Housing and Lands Denis Kellman also took to Facebook yesterday morning tothank the people of St Lucy and all those who helped, for the support given to me over the years

The five-time Member of Parliament who lost this time around to the BLP’s Peter Phillips by over 2,000 votes, congratulatedPhillips and his team for the transformation.

I wish the church leaders well with their job aheadKellman added without elaborating.

However, more gracious in defeat was the DLP’s St James South candidate Donville Inniss, the former Minister of Industry, International Business, Commerce and Small Business Development, who was also trounced by the BLP’s Sandra Husbands in Thursday’s poll. Husbands polled 4,012 votes to Inniss’ 1,674, but in accepting defeat, Inniss posted:

The people have spoken and the decision is to be respected. Congratulations to aĺl of the BLP candidates. The new DLP shall rise again

I congratulate the BLP on its win. Our people have spoken. God bless you allhe said, following his defeat by BLP candidate Adrian Forde by 2,760 votes.

However, Paul, who polled 865 votes to the BLP’s Ian Gooding-Edghill with 3,291, said the major defeatdoes not mean that the party is vanquished.

The party will rebuild and return even stronger to continue its mandate. The loss will be learnt from and will embolden the party to do better in the future. It is the intention of the party to remain true to its corePaul added.

Former Minister of Education Ronald Jones, who lost by 2,728 votes to the BLP’s Ryan Straughn, also said:I wish to express my sincerest thanks to the people of Christ Church East Central who gave me an opportunity to serve them for some 15 years in the Parliament of Barbados.

My journey is now concluded at this level. I move on to new journeys and new sacrifices. May the good Lord bless this country. Thanks to all of you