Another 100,000 people may have to move away from China’s Three Gorges Dam due to the risk of disastrous landslides and bank collapses around the reservoir of the world’s biggest hydroelectric facility, state media said Wednesday.

The Ministry of Land Resources says the number of landslides and other disasters has increased 70 per cent since the water level in the $23 billion showcase project rose to its maximum level in 2010.

Some 1.4 million people already have been resettled due to the huge project on the Yangtze River. Authorities may move another 100,000 people in the next three to five years to minimize the risk of casualties from such threats, Liu Yuan, a ministry official, told China National Radio in a report posted on a government website and carried by the Shanghai Daily newspaper.

He said that 5,386 danger sites were being monitored and that work was beginning on rockfalls and landslides at 335 locations around the lake. 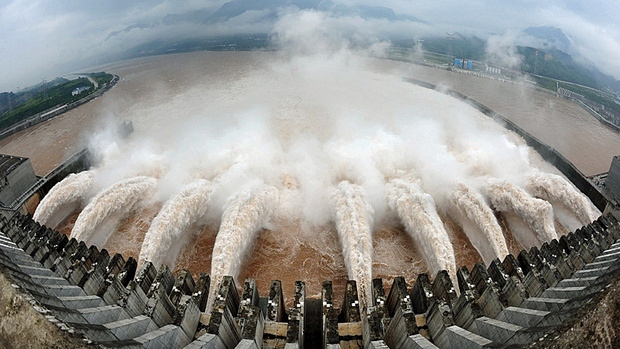 In a recent report, though, the ministry outlined many of the same concerns, including 196 geological “emergencies” in 2008-2009.

Fluctuations in water levels can trigger landslides and other problems, and the risks are accentuated by the density of the population in the area, it said.

About a year ago, China’s Cabinet outlined a slew of urgent environmental, geologic and economic problems related to the dam, which has been the subject of intense debate for decades.

Many of the people obliged to move to make way for the Three Gorges Dam have struggled to regain their livelihoods and settle into new homes, that report said.

The dam has been touted as the best way to end centuries of flooding along the Yangtze and provide power for China’s industrial boom. But some geologists contend that damming up too much water in the reservoir carries a heightened risk of earthquakes and prolonged damage to the river’s ecology.

A recent report by the environmental group Probe International contended that the entire upper Yangtze, where 20 dams are located, is among areas facing the risk of cascading failures of dams built in seismically active areas.

The government has acknowledged that filling the reservoir has increased the frequency of earthquakes, but denied that it had anything to do with a powerful quake to the northwest in Sichuan on May 12, 2008, that killed 87,000 people